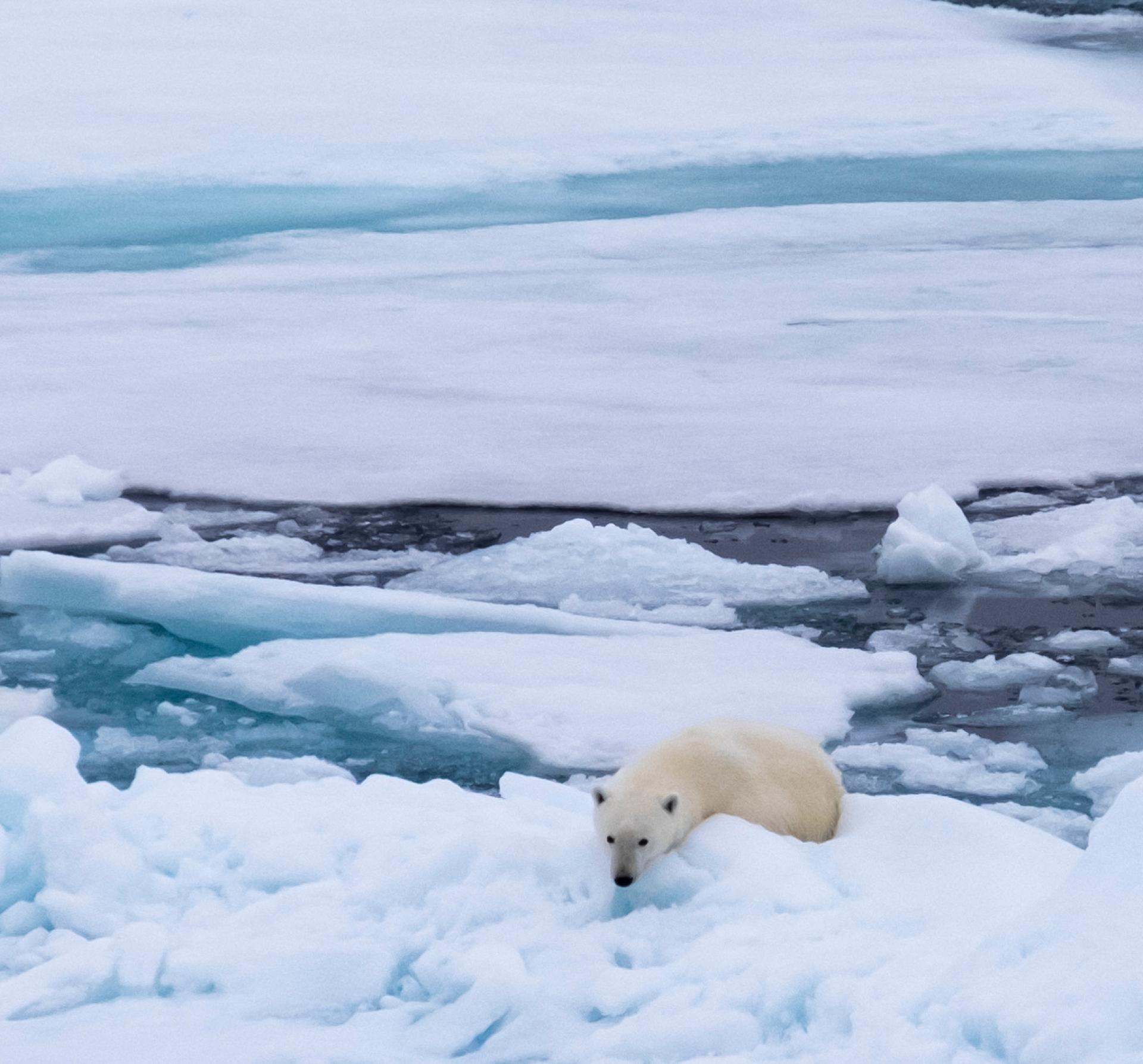 
#2 Where can we find Polar Bears?

Polar bears live in the Arctic, in the circumpolar north. The most important habitats for polar bears are the edges of the pack ice, and broken pack ice with ice patches and leads (open water between sea ice). Here is where polar bears can find the greatest number of seals, their main source of food. Polar bears can be found in Arctic Canada, Alaska, Greenland, Russian Arctic and Svalbard archipelago. There are 19 identified populations of polar bears living in four main regions across the sea ice in the Arctic.


#3 What is an Aurora Borealis?

The Auroras Borealis is an electrical phenomenon characterized by reddish or greenish lights in the sky. These lights are the effect of the interaction of charged particles coming from the Sun in the upper atmosphere, and due to the Earths magnetism they are transported towards the Earths Magnetic Poles, that is the reason why they are visible in high latitudes in the northern and southern hemispheres.
In the northern hemisphere they are called Auroras Borealis or Northern Lights, and in the southern hemisphere they are called Auroras Australis or Southern Lights.


#4 Is it possible to fly to the Arctic?

Yes, its possible. There are several entry points to go to the Arctic. Due to the distances involved, many people fly to the Arctic.
Longyearbyen, on Svalbard archipelago is the northernmost airport with scheduled flights in the Arctic, making it an excellent hub for expedition cruises and Arctic tourism in the high Arctic.
There are also regular and charter flights to other parts of the Arctic such as the Canadian Arctic, Greenland, and Arctic Russia.


#5 How long are the shore excursions?

If the weather allows, in this type of voyages the aim is to have about two shore excursions per day.
Those shore excursions on average last about 2 to 3 hours. As a general rule, the smaller is the ship, the longer are the shore excursions. But sometimes, if the weather doesnt allow, the tours can be shortened, or even cancelled. Flexibility and safety are paramount in the Polar Regions.

Polar bears are hunters at the top of the food chain, they main source of food are seals, but they also feed on other animals and carcasses of dead wildlife, especially dead whales. The last decades there has been more polar bear/Human interaction and when humans enter polar bear territories can, of course, bring some sort of conflict. One of the reasons may be the climate change as the polar bears are forced to move from the coastline towards inland, but also because humans are populating and visiting more frequently Arctic areas. Arctic tourism is strictly regulated with focus on the environment and the well being of wildlife, for that reason, it is forbidden to approach, to lure, and to disturb polar bears on shore.
For more information visit the website of the Association of Arctic Expedition Cruises Operators https://www.aeco.no/

The weather in Svalbard differs per area and location. The North Atlantic Current helps provide Svalbard with warmer temperatures in the southwest than in other areas of the archipelago. However, strong winter breezes, low pressure and the combination of wet sea air and cold polar air can lead to rapidly changing weather conditions, especially during the winter months.
During the winter the temperature in Svalbard can be around -16 to -12 ºC (3 to 10 ºF). During the summer, the temperature in July (the warmest month) can range between 3 and 8 ºC (37 to 46 ºF). It can be cloudy, it can rain, and even snow during the summer season. For that reason we recommend that you bring a variety of warm and waterproof clothes. The best is to dress in layers. To learn more about clothing, check the how to dress section.


#8 What kind of wildlife can we see in Svalbard?

A voyage to Svalbard will give you a great opportunity to spot wildlife. Polar bears are obviously the star of the show, but also you can find walrus, seals, reindeers, Arctic foxes, and many birds like guillemots, little auks, geese, divers, and phalaropes, among other birds. Svalbard waters are also ideal to spot belugas, humpback whales, fin whales, Minke whales, and the largest animal that ever lived in the world: the blue whale.


#9 When is the best time to travel to Svalbard?

It depends on what you would like to experience. In case you want to experience the Polar night or the Aurora Borealis, November to February is the time to travel to Svalbard. But if you would like to see polar bears, walrus and other wildlife, the best time is the summer, between May and September, when the sea ice melts and breaks up enough for ships to sail through it and explore for wildlife.

The central region of Greenland is covered by a huge ice cap (in fact, the second largest ice cap in the World after Antarctica). However, most of the coastal area, especially in the west, is free of ice, and there is where most people live. Nuuk, the Capital of Greenland has an average temperature of -8º C in winter and up to 7º C in summer.


#11 What is the Capital of Greenland?

Nuuk is the capital and the largest city of Greenland. It is located at 64° 10 N, 51º 43 W, which makes it the northernmost capital of the World. There are more than 17,000 people living in Nuuk, which represents about a quarter of the total population of Greenland.


#12 What kind of wildlife can we find in Greenland?

The main attraction for visiting Greenland is the astonishing landscape, however, in a cruise to the biggest island in the World you can find a number of land mammal species, it is possible to see polar bears, Arctic hares, reindeer, musk oxen, collared lemmings, and Arctic foxes. Greenland is also home of about 52 species of birds, and extremely rare species like the Arctic wolf and the ermine.