Voyaging to two of the most isolated, icy archipelagoes in the Russian High Arctic. 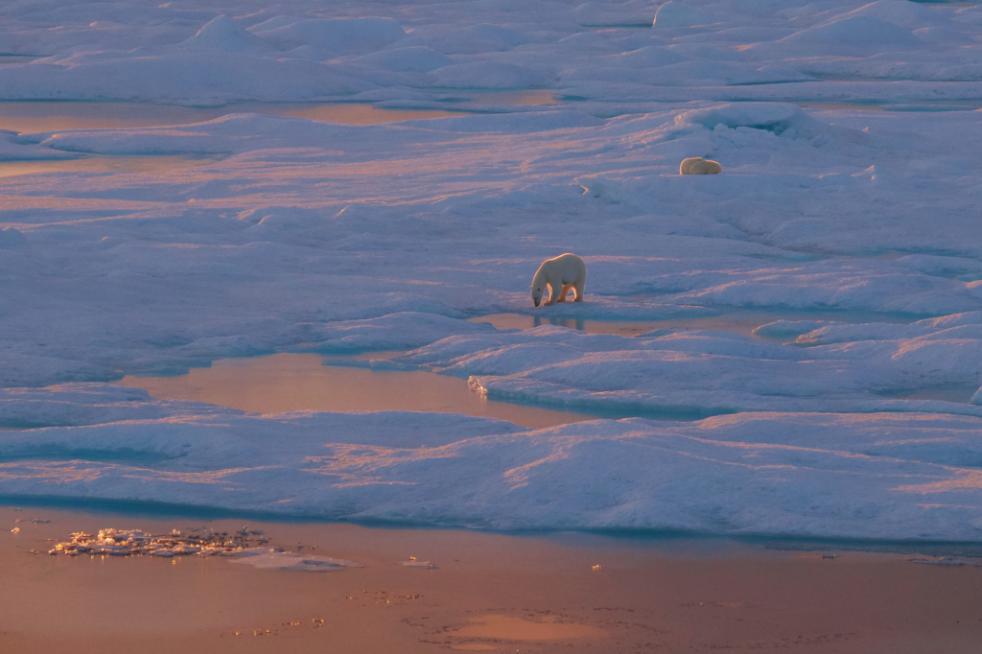 From the mountains of Novaya Zemlya to the wildlife sanctuary of Franz Josef Land, these are rugged and essentially uninhabited landscapes that few have ever experienced. Theres no shortage of amazing adventures in these remote regions, where ice-capped peaks soar majestically out of the water and polar bears wander in their natural environment.

The Arctic has been inspiring explorers for centuries, and our expeditions offer the chance for you to discover why. Were excited to host you on your unforgettable adventure!

This itinerary adds a Mandatory Transfer Package U$S1,995 per passenger.
Package includes: One night pre- and one night post-expedition in Helsinki, transfer to and from the airports to hotel or ship and Air Transfer Helsinki - Murmansk - Helsinki.

Your Arctic adventure begins in Helsinki, renowned for its extraordinary architecture and intriguing mix of eastern and western influences. If you arrive early, explore the many museums, galleries and restaurants, relax at a Finnish sauna or wander the vibrant Design District before retiring at your included hotel.

After breakfast, we will transfer to the airport and board our private charter flight to Murmansk, Russia. Once aboard, get acquainted with the ship and crew and settle in for your voyage north.

As we sail through the Barents Sea, your Expedition Team will prepare you for the adventures that await. Learn about the storied history and politics of the region, its fascinating wildlife, geology, ecology and climate, and the incredible sights you will soon explore. Staff will keep a lookout for seabirds, such as kittiwakes, skuas and fulmars soaring above your ship. Whale and seal sightings may also be possible in this biologically diverse sea.

As we explore Novaya Zemlya, expect a new adventure every day. Each expedition will be unique, depending on the weather and ice, but a few landing sites we strive to visit include Inostrantseva Bay, the Oransky Islands, Cape Zhelaniya, Cape Spory Navalok and Russkaya Gavan.

Boasting one of the most picturesque glaciers in the entire archipelago, Inostrantseva Bay provides breathtaking panoramic views of pristine arctic wilderness. If conditions allow, we may explore ashore, or Zodiac cruise along the face of the glacier, at a safe distance, possibly witnessing the wonders of calving ice. Encounters with Brünnichs guillemots (thick-billed murres) are likely, owing to a small colony in the coastal cliffs.

To the northwest side of Severny Island are the Oransky Islands. Wildlife abounds here, with a variety of animal and plant life to be discovered, Walrus have been sighted here on many previous expeditions. Coming across a walrus haul-out is unforgettable. These giant pinnipeds of the Arctic create a raucous as each walrus vies for a choice spot of coastline. Encounters with whales and seabirds are possible, as well as polar bears, a genetically distinct subpopulation here.

A significant site in polar exploration, Novaya Zemlya also offers a number of opportunities for you to trace the footsteps of famous explorers and reflect on the regions history.

Bid farewell to Novaya Zemlya as we cruise farther north to Franz Josef Land. There are several activities to keep you engaged while at sea. Attend presentations by your Expedition Team, relax in our polar library or simply spend some time on deck, admiring the sea.

This remote group of 191 islands, many covered in ice, forms the most northerly archipelago in Eurasia and lies entirely within the Arctic Circle. A nature reserve, it is part of the Russian Arctic National Park. Weather and ice conditions will shape our exploration, but we do hope to explore historical sites, remote seabird colonies and walrus haul-out at some notable destinations, such as Cape Flora, Cape Norway, Bell Island and Tikhaya Bukta. Polar bear encounters are also possible.

On Jackson Island, Cape Norway is where Norwegian explorers Fridtjof Nansen and Hjalmar Johansen wintered from 1895 to 1896. The conditions were astonishingly difficult, but they survived until the summer and continued their journey south. The remains of their small hut are still here today, along with a memorial marking the event.

Exploring Tikhaya Bukta (Calm Bay), the site of an abandoned weather station on Hooker Island, will feel like stepping back in time. There is plenty to discover as you wander the ruins, immersed in Russian polar history, and you may even be able to send a postcard from the post office!

The Stolichky and Appolonov Islands offer plentiful walrus encounters, as the lumbering giants can be found hauled out here. If ice and weather are in our favor, well explore the area by Zodiac, at a safe distance, to view these pinnipeds of the Arctic in their natural habitat.

As your Arctic expedition winds down you have a couple of days to sail through this wildlife-rich sea, where whales of various species are often seen. Take in a presentation, reminisce about your incredible journey with your shipmates, relax in the lounge while swapping stories and photos or enjoy the solitude of the sea. Expedition staff will be on hand to answer any remaining questions and spot wildlife.

Returning to Russias most northerly city, youll have time to bid farewell to your Expedition Team and crew before catching our group charter flight back to Helsinki, where you will have one more night in this exquisite city.

After breakfast, spend time exploring more of the Finnish capital or catch your homeward-bound flight. 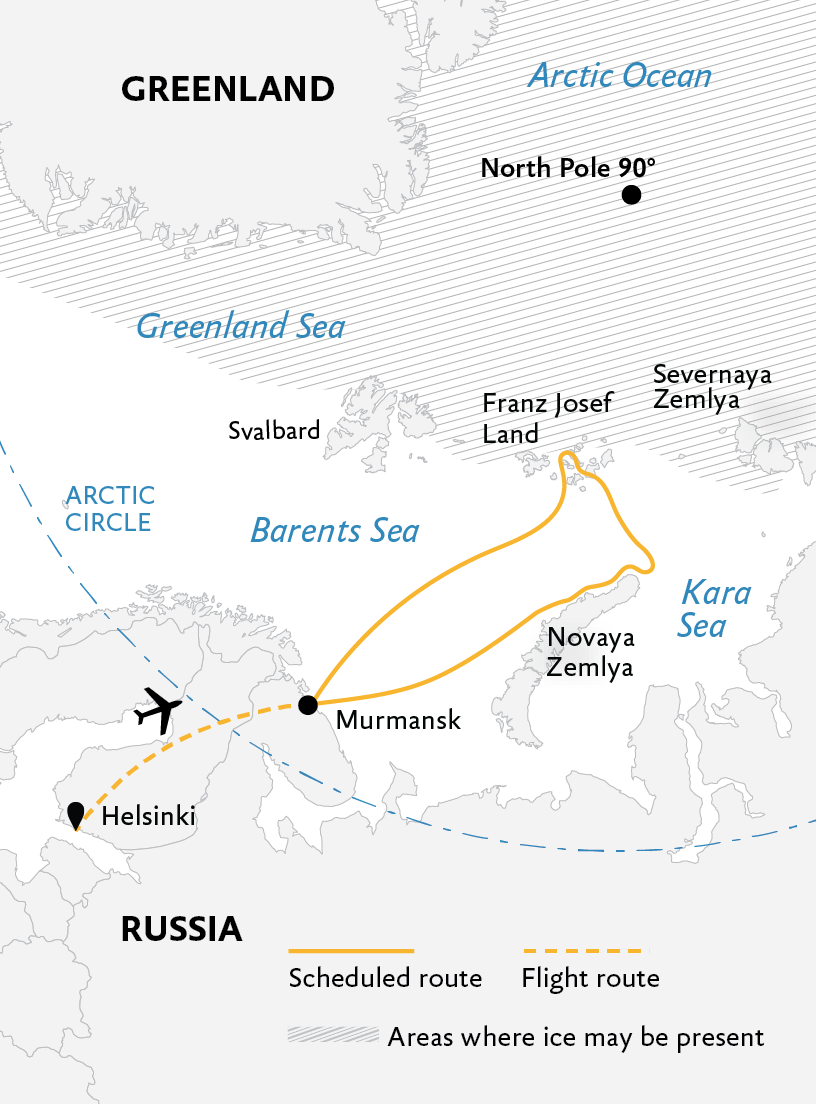 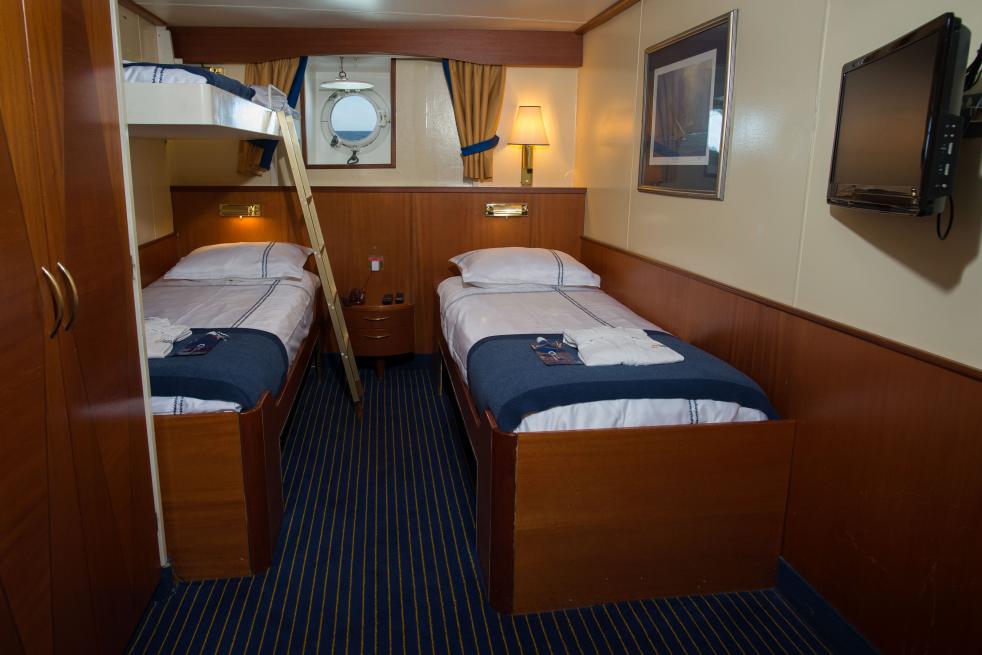 From 145 sq. ft. (13.5 sq. m), a Triple Cabin is equipped with two lower berths and one upper berth. Located on the Main Deck, it has private facilities, and a porthole with exterior views. 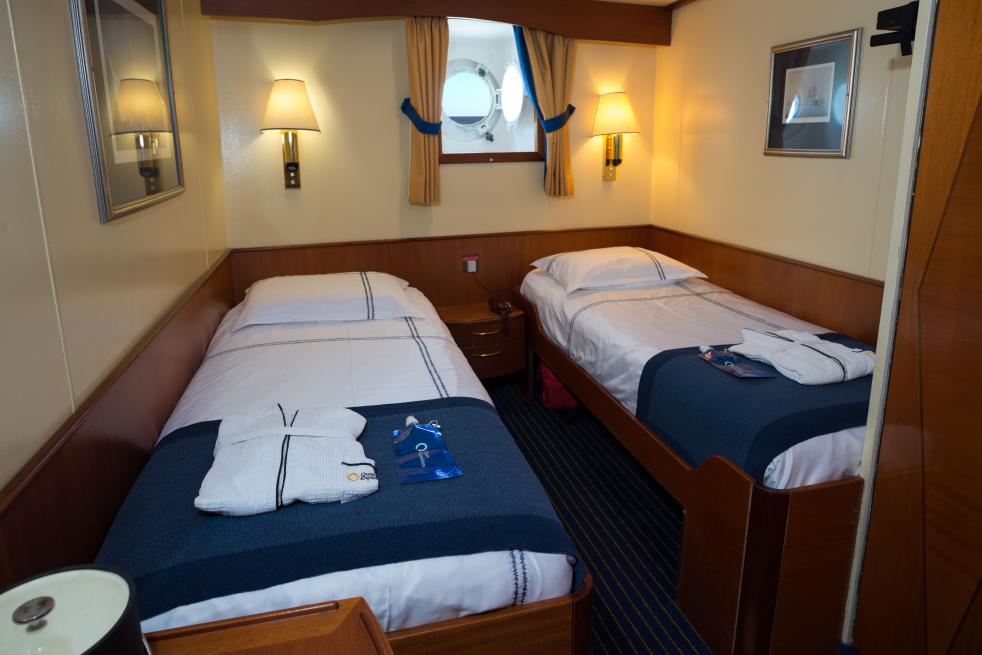 From 115 sq. ft. (11 sq. m), a Lower Deck Twin Cabin is equipped with two lower berths. Located on the Lower Deck, it has private facilities, and a porthole with exterior views. 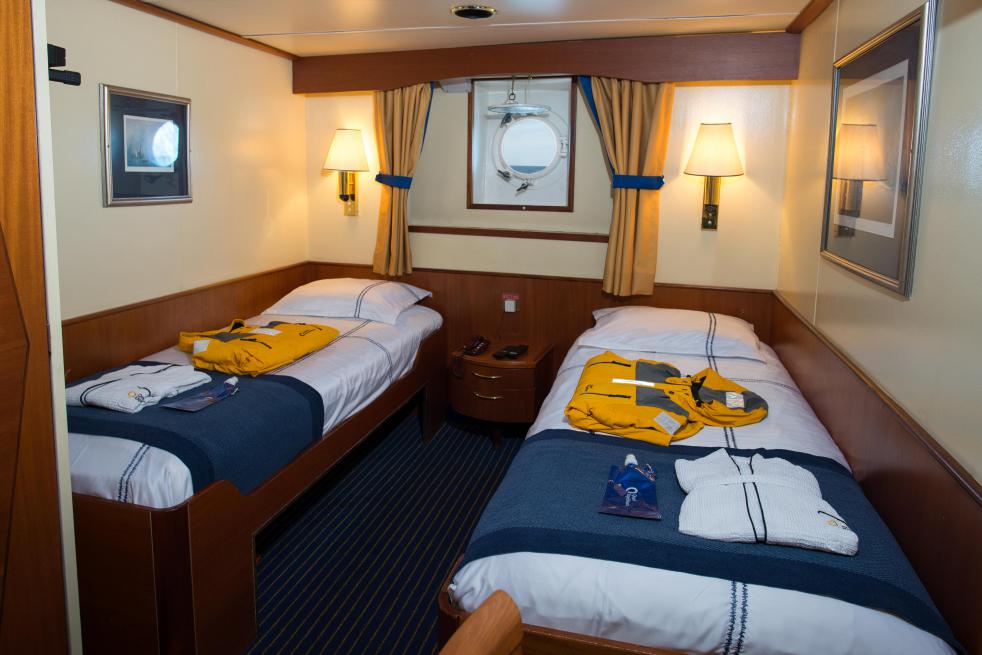 From 115 sq. ft. (11 sq. m), a Main Deck Twin Porthole Cabin is equipped with two lower berths. Located on the Main Deck, it has private facilities, and a porthole with exterior views 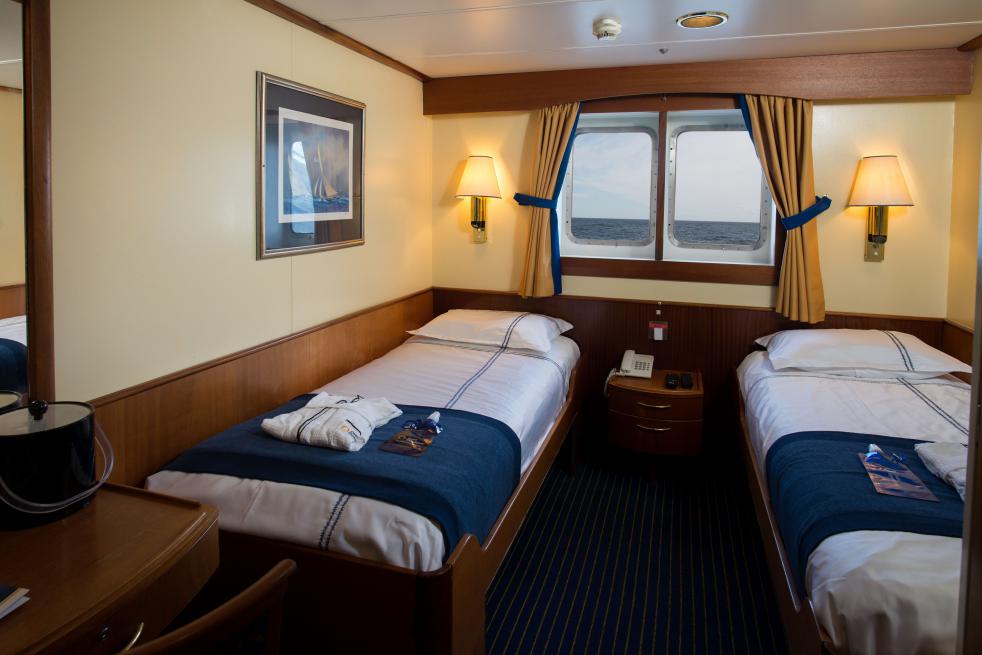 From 115 sq. ft. (11 sq. m), a Main Deck Twin Window Cabin is equipped with two lower berths. Located on the Main Deck, it has private facilities, and a window with exterior views. From 132 sq. ft. (12 sq. m), a Superior Cabin is equipped with two lower berths. Located on the Upper and Captains Decks, it has private facilities, and windows with exterior views. From 144 sq. ft. (13 sq. m), a Deluxe Cabin is equipped with two lower berths. Located on the Captains Deck, it has private facilities, and windows with exterior views

From 215 sq. ft. (20 sq. m), a Suite is equipped with one double bed made up of two twin berths. Located on the Captains Deck, it has windows with exterior views and private facilities. Cabin 403 has a bathtub; other Suites have shower stalls. 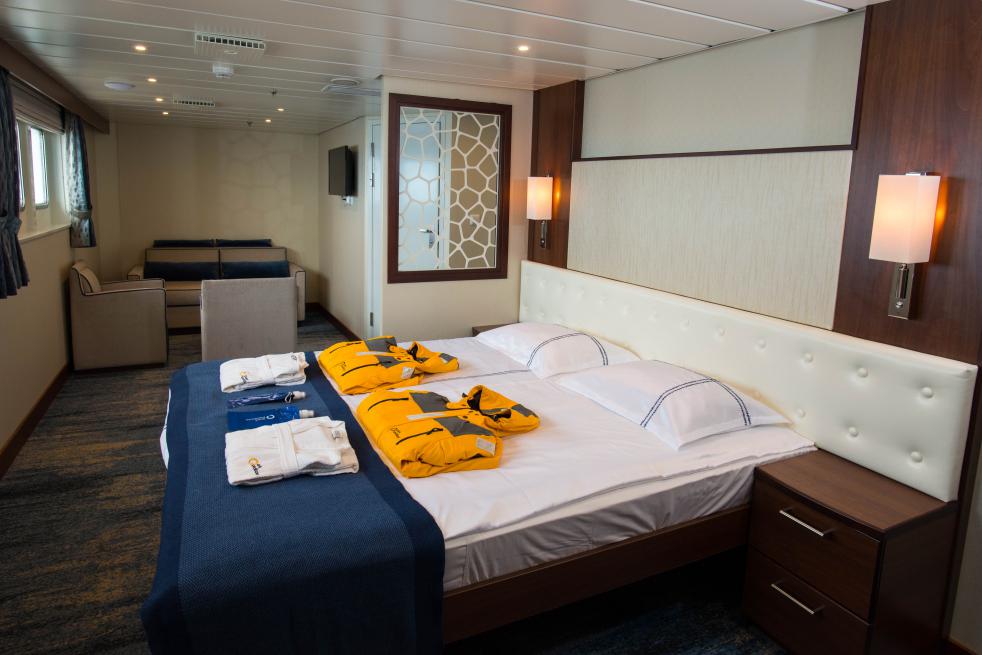 From 208 sq. ft. (19 sq. m), an Owners Suite Cabin is equipped with one double bed made up of two twin berths. Located on the Bridge Deck, it has private facilities, and windows with exterior views. 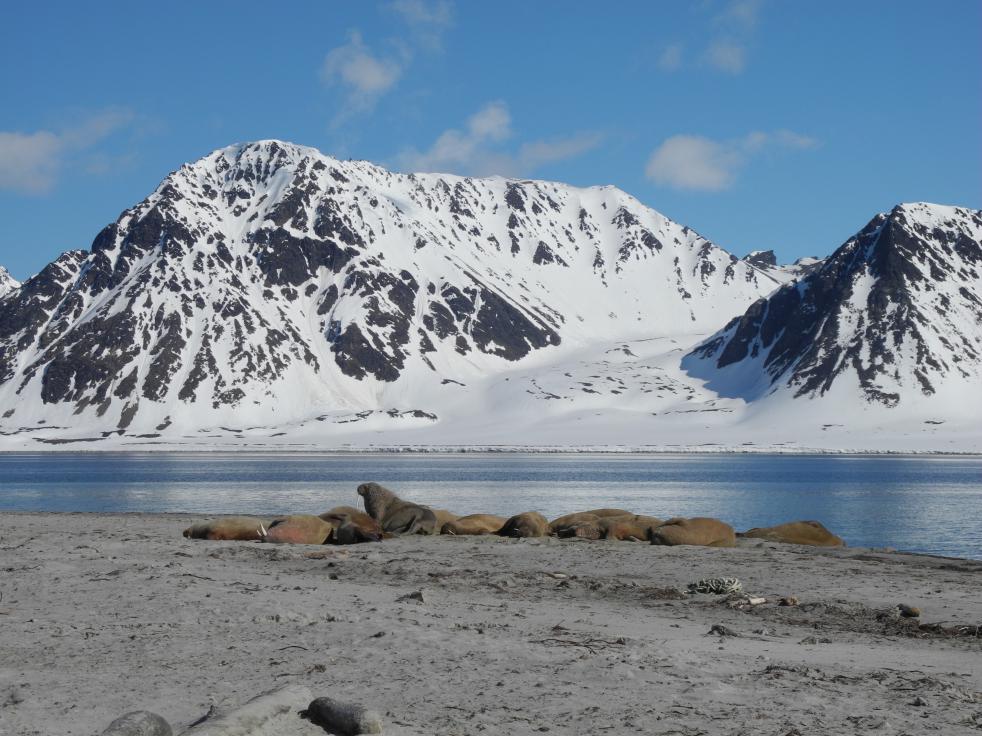