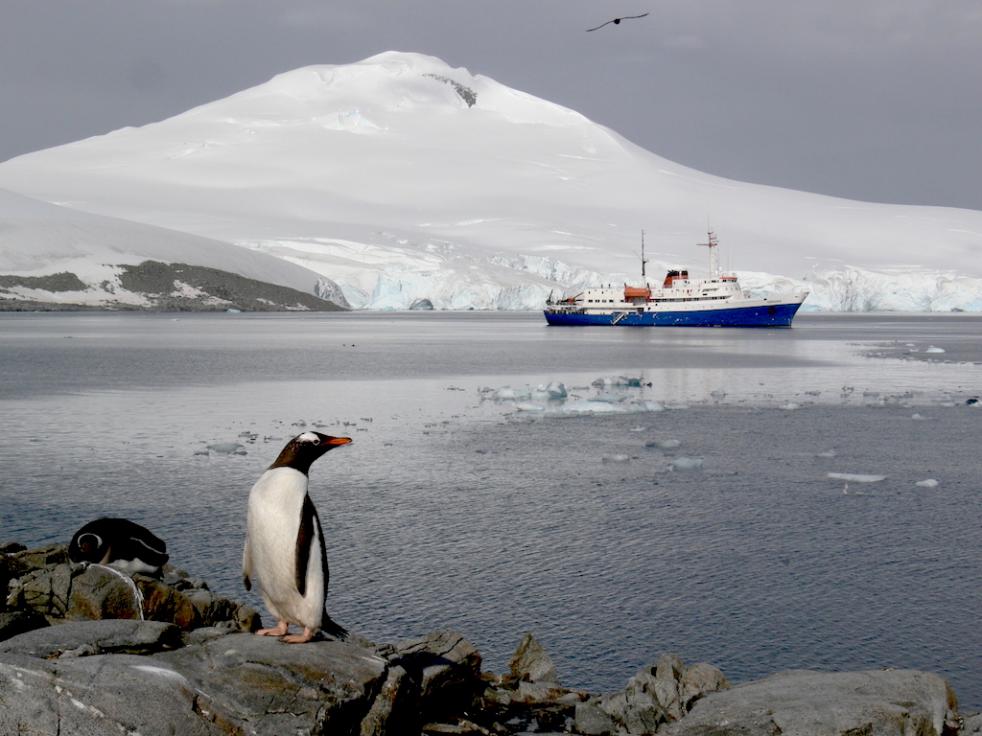 PLEASE NOTE: All itineraries are for guidance only. Programs may vary depending on local ice, weather, and wildlife conditions. The on-board expedition leader will determine the final itinerary. Flexibility is paramount for expedition cruises. Average cruising speed of m/v Plancius is 10.5 knots.

Day 4 - 7: Enter the Antarctic
Gray stone peaks sketched with snow, towers of broken blue-white ice, and dramatically different wildlife below and above. You first pass the snow-capped Melchior Islands and Schollaert Channel, sailing between Brabant and Anvers Islands. Sites you may visit include: Cuverville Island  Stabbing up between Rongé Island and the Antarctic Peninsula, Cuverville houses a massive colony of gentoo penguins as well as pairs of breeding brown skuas. Danco Island  Activities here may focus on the gentoo penguins nesting on the island, in addition to the Weddell and crabeater seals that can be found nearby. Neko Harbour  An epic landscape of mammoth glaciers and endless wind-carved snow. Opportunities for Zodiac cruising and kayaking provide you the closest possible view of the ice-crusted alpine peaks. Paradise Bay  You may be able to take a Zodiac cruise in these sprawling, ice-flecked waters, where you have a good chance of seeing humpback and minke whales. Port Lockroy  After sailing through the Neumayer Channel, you get a chance to visit the former British research station  now a museum and post office  of Port Lockroy on Goudier Island. You may also be able to partake in activities around Jougla Point, meeting gentoo penguins and blue-eyed shags. There are great opportunities also for kayaking and camping here, and when conditions are right, you can even snowshoe around the shore.

Day 8: Scenes of South Shetland
The volcanic islands of the South Shetlands are windswept and often cloaked in mist, but they do offer subtle pleasures: Theres a wide variety of flora (mosses, lichens, flowering grasses) and no small amount of fauna (gentoo penguins, chinstrap penguins, southern giant petrels). In Deception Island, the ship plunges through Neptunes Bellows and into the flooded caldera. Here you find hot springs, an abandoned whaling station, and thousands of cape petrels  along with a number of kelp gulls, brown and south polar skuas, and Antarctic terns. Wilsons storm petrels and black-bellied storm petrels also nest in the ruins of the whaling station in Whalers Bay. As an alternative, you may be able to engage in activities near Half Moon Island. Here chinstrap penguins and Weddell seals often haul out onto the beach near Cámara Base, an Argentine scientific research station. Conditions on the Drake Passage determine the exact time of departure.

Day 9 - 10: Familiar Seas, Familiar Friends
Your return voyage is far from lonely. While crossing the Drake, youre again greeted by the vast array of seabirds remembered from the passage south. But they seem a little more familiar to you now, and you to them.

Day 11: There and Back Again
Every adventure, no matter how grand, must eventually come to an end. Its now time to disembark in Ushuaia, but with memories that will accompany you wherever your next adventure lies. 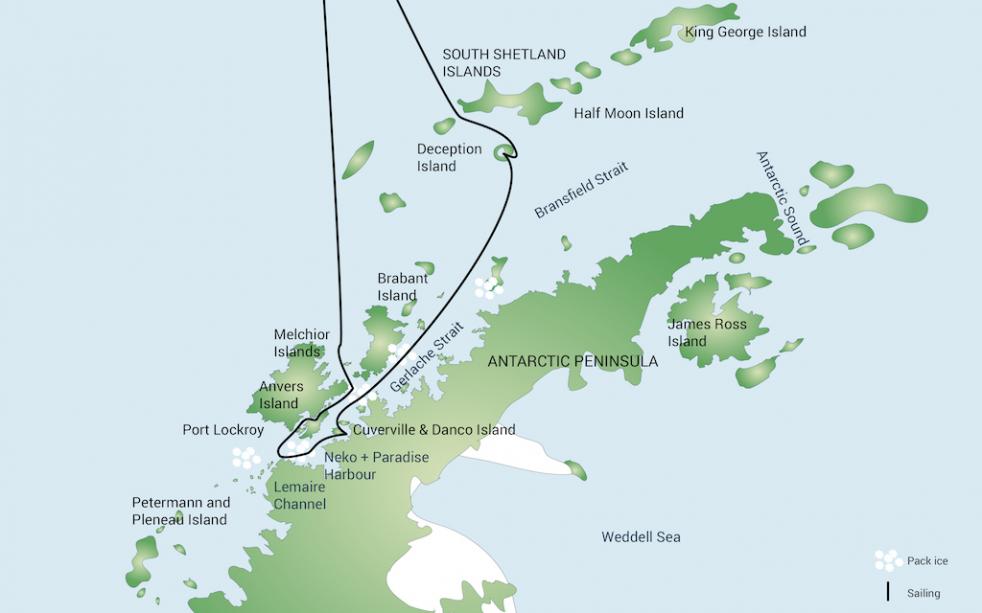 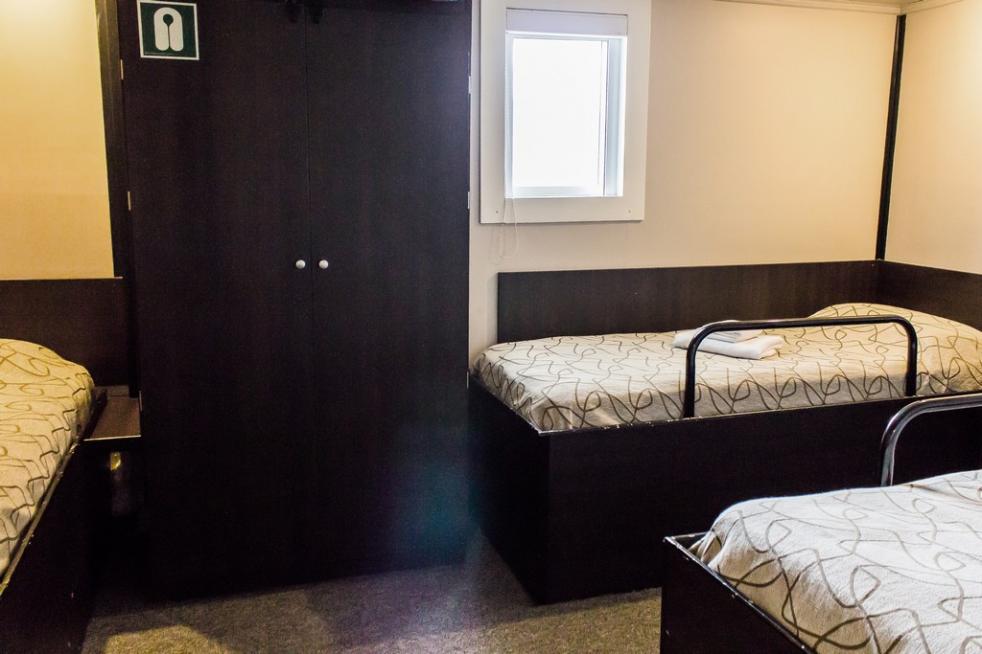 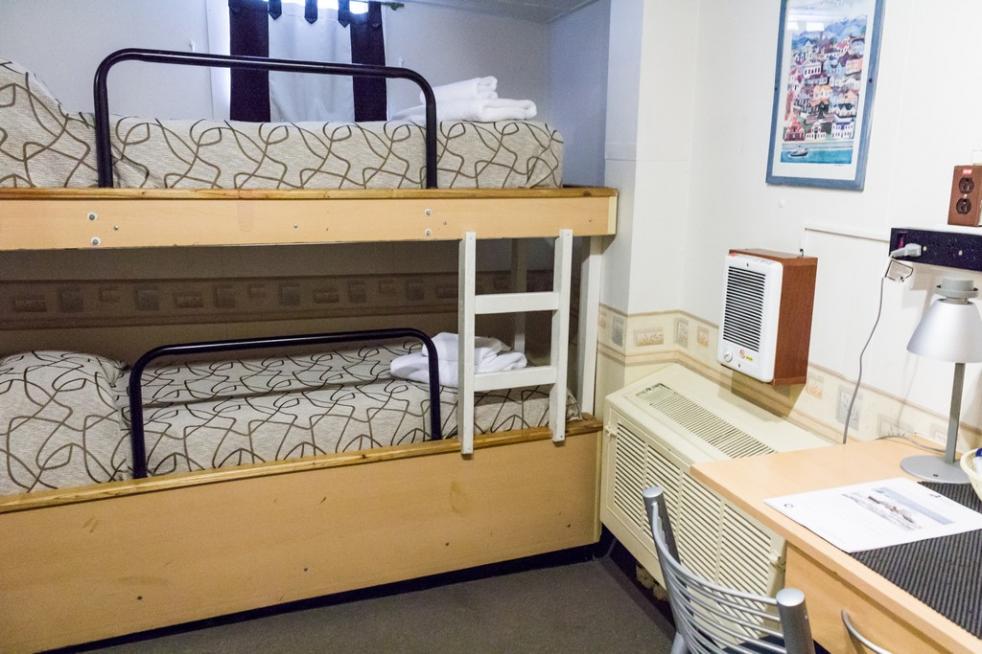 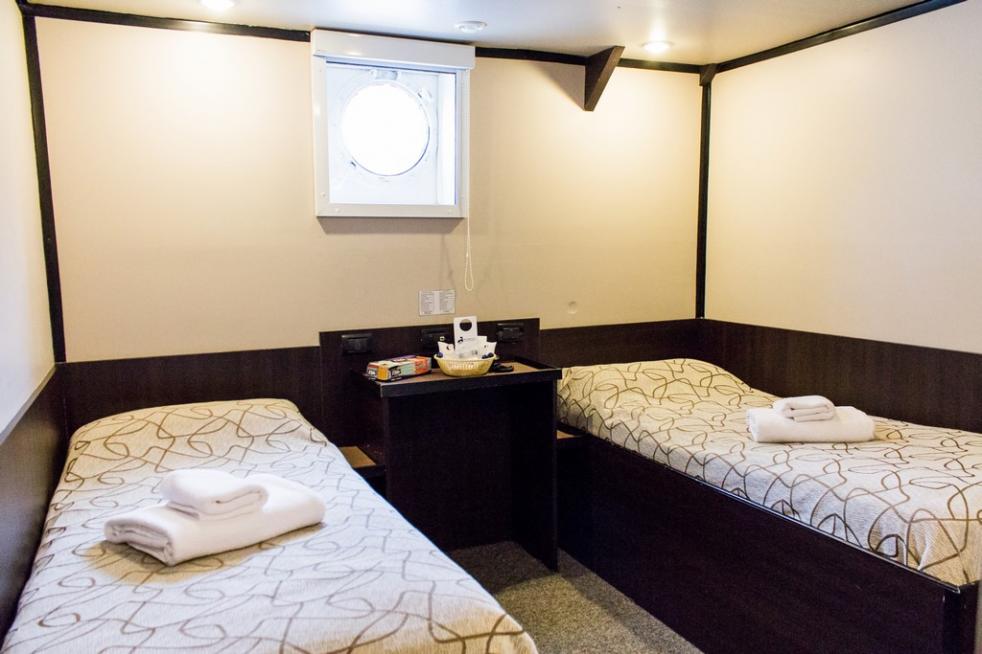 11 Twin outside cabins with portholes or windows on deck E, private facilities, two lower berths. Cabin 640 has one double bed. 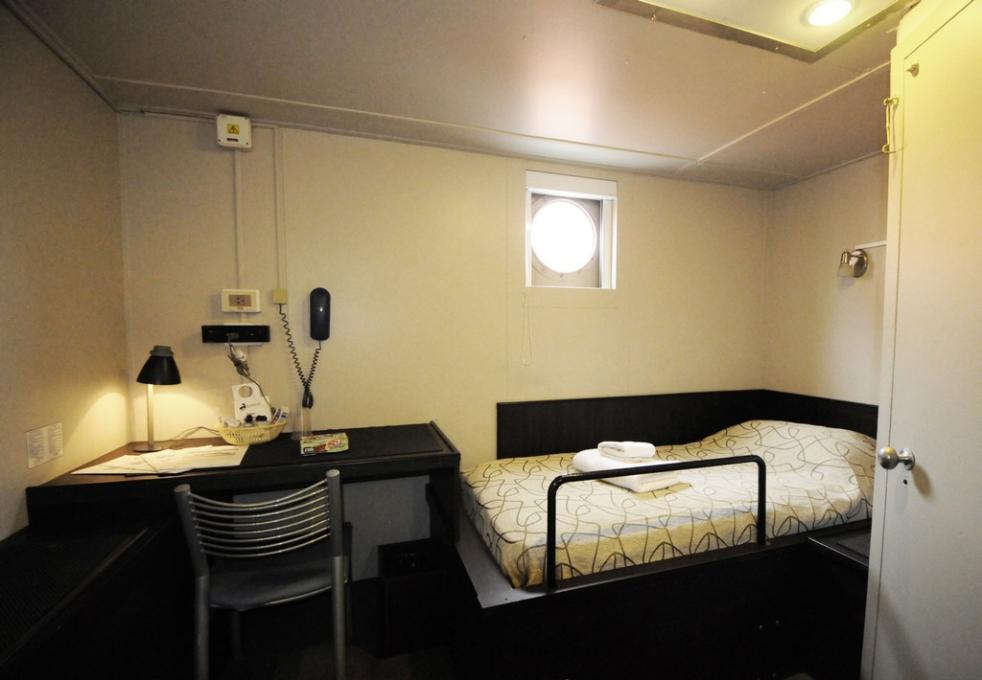 9 Twin outside cabins with windows on the upper deck G, private facilities, two lower berths. Cabin 301 has one double and one single bed. 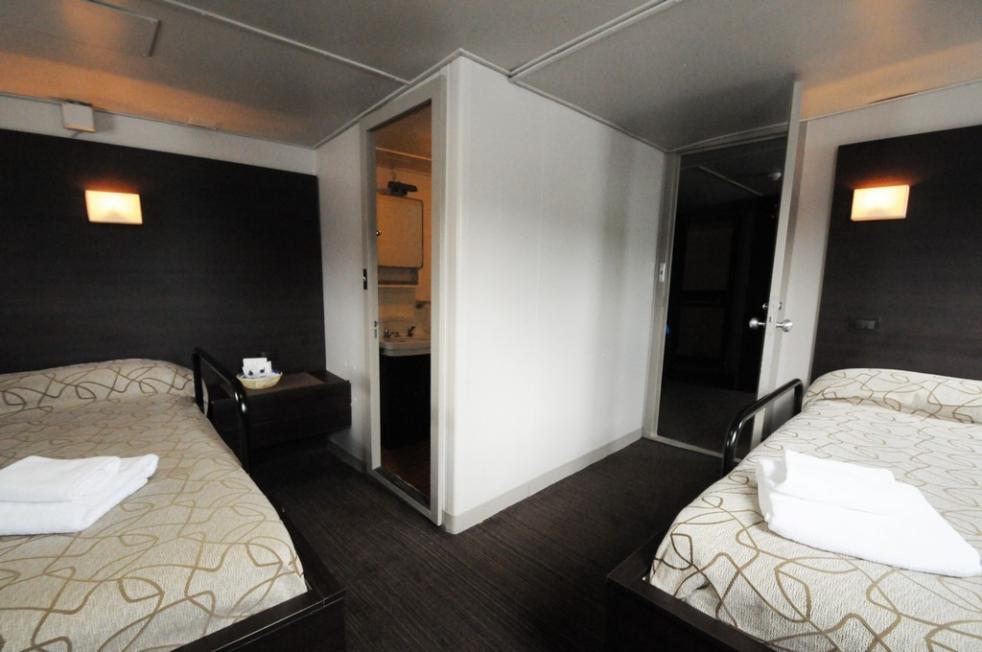 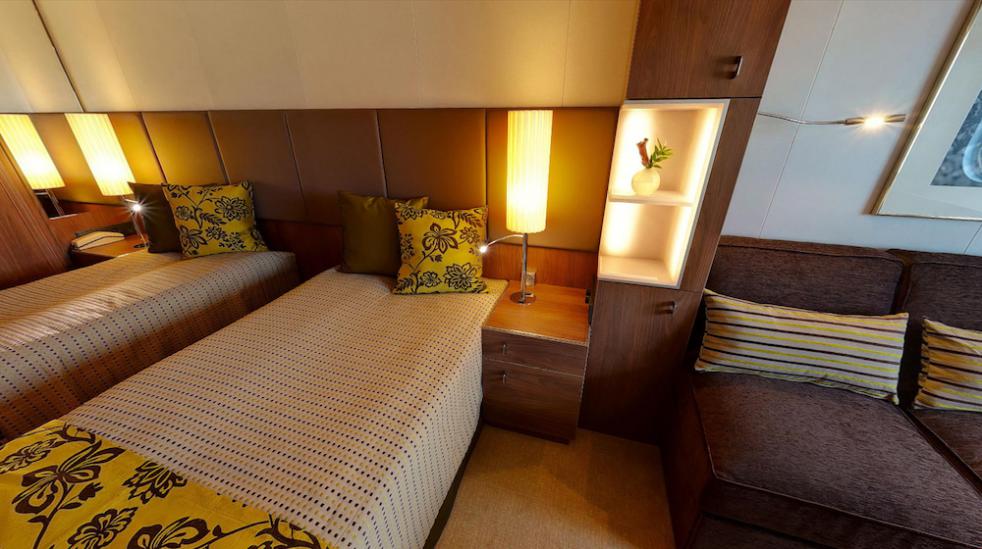 These cabins are a popular choice for solo travellers willing to share, a family, or a group of friends travelling together. Located on Deck 3, cabins feature three single beds, one of which can convert to a convertible sofa and lounge during the day. These cabins feature writing desk and chair, ample storage and private washroom facilities. A flatscreen entertainment system is also included. These cabins provide easy access to the expedition room and gangway. Spacious and well appointed, these cabins are situated on Deck 4 and have the option for either a queen or two single configured beds. Features include a comfortable lounge adjacent to the large picture window, writing desk and chair, ample storage and private washroom facilities with shower. A flatscreen entertainment system is also included. These cabins provide easy access to the main dining room on the ship as well as the gift shop. 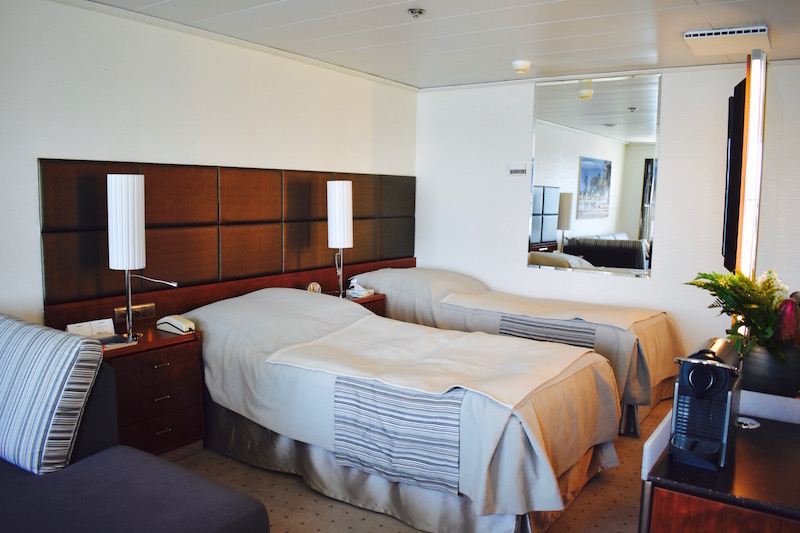 Located forward on Deck 5 the Superior cabins have the option for either a queen or two single beds. Features include a comfortable lounge adjacent to the large picture window, writing desk and chair, ample storage and private washroom facilities with shower. A flat screen entertainment system is also included. These cabins provide easy access to the forward stairs leading up to the bridge on Deck 6 and the forward observation lounge located on Deck 7. 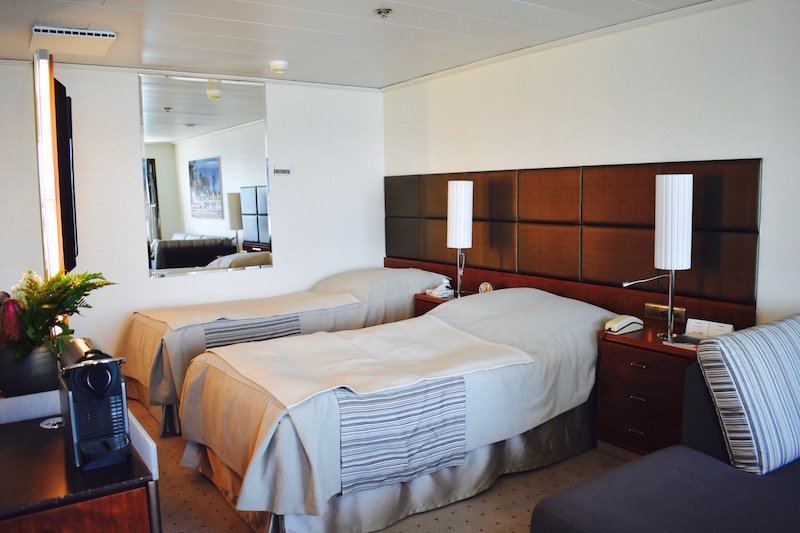 Superior Plus cabins are located midships on Deck 5. They are spacious and well appointed with the option for either a queen or two single beds. A comfortable lounge is placed by the large picture window, writing desk and chair, ample floor to ceiling cabinet storage and private washroom facilities with shower. A flat screen entertainment system is also included. Centrally located on the ship, these cabins provide easy access to the aft observation lounge featuring 180 degree views and the ships dining areas. The Shackleton Suites are situated on Deck 6. Suites include the comfort of a sectional lounge, writing desk, substantial floor to ceiling cabinetry, and washroom facilities with shower. A flat-screen entertainment system is also included. Sleeping quarters feature the option for either a queen or two single beds with upgraded linen/ pillows. These Suites provide easy access to the ships bridge, the bistro and outdoor observation spaces. The forward panoramic observation lounge and recreation facilities are also located nearby on Deck 7.

The One Ocean Suites are situated on Deck 6 and offer an indulgent amount of space. Sleeping quarters feature a queen size bed with upgraded linen/pillows. Included is a comfortable sectional lounge with matching club chairs, a large desk, expansive floor to ceiling cabinetry, and spacious washroom facilities with both a shower and bathtub. A flat-screen entertainment system is also included. These suites provide easy access to the ships bridge, the bistro and outdoor observation spaces. The panoramic observation lounge and recreation facilities are located nearby on Deck 7. 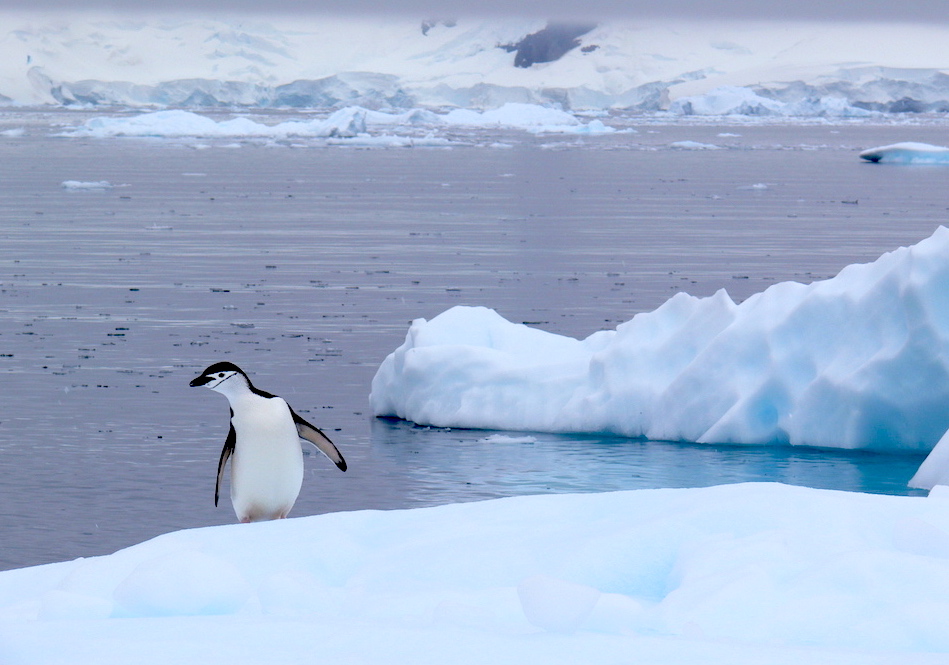