Falkland/Malvinas Islands, South Georgia and the Antarctic Peninsula, including the Polar Circle. South Georgia offers a spectacular scenery, outstanding wildlife, history of human endeavour and is at the same time such a remote island group, that a visit turns into a real privilege.

It is easy to think "small" with islands, but South Georgia is something very different. The mountain ranges offer a beguiling landscape. There are sheltered valleys with meltwater streams, tussac grass covered moraines with close-up wildlife. Glaciers cover the mountains and even huge tabular icebergs from the shelves of the far south thump along South Georgia´s weather shore to become features of its great landscape. Come and join us to explore all the facets South Georgia has to offer.

Day 1: End of the world, start of a journey
Your voyage begins where the world drops off. Ushuaia, Argentina, reputed to be the southernmost city on the planet, is located on the far southern tip of South America. Starting in the afternoon, you embark from this small resort town on Tierra del Fuego, nicknamed The End of the World, and sail the mountain-fringed Beagle Channel for the remainder of the evening.

Day 2: The winged life of the westerlies
Several species of albatross follow the vessel into the westerlies, along with storm petrels, shearwaters, and diving petrels.

Day 3: Finding the Falklands
The Falkland (Malvinas) Islands offer an abundance of wildlife that is easily approachable, though caution is always advised. These islands are largely unknown gems, the site of a 1982 war between the UK and Argentina. Not only do various species of bird live here, but chances are great youll see both Peales dolphins and Commersons dolphins in the surrounding waters.

Day 4: The seat of Falklands culture
The capital of the Falklands and center of its culture, Port Stanley has some Victorian-era charm: colorful houses, well-tended gardens, and English-style pubs are all to be found here. You can also see several century-old clipper ships nearby, silent witnesses to the hardships of 19th century sailors. The small but interesting museum is also worth a visit, covering the early days of settlement up to the Falklands War. Approximately 2,100 people live in Port Stanley. Feel free to wander at will, though be aware that admission fees to local attractions are not included in the voyage.

Day 5  6: Once more to the sea
En route to South Georgia, you now cross the Antarctic Convergence. The temperature cools considerably within the space of a few hours, and nutritious water rises to the surface of the sea due to colliding water columns. This phenomenon attracts a multitude of seabirds near the ship, including several species of albatross, shearwaters, petrels, prions, and skuas.

Day 7  10: South Georgia journey
Today you arrive at the first South Georgia activity site. Please keep in mind that weather conditions in this area can be challenging, largely dictating the program.

Over the next several days, you have a chance to visit the following sites:

Prion Island  This location is closed during the early part of the wandering albatross breeding season (November 20  January 7). From January on, the breeding adults have found their partners and are sitting on eggs or nursing their chicks. Enjoy witnessing the gentle nature of these animals, which possess the largest wingspan of any birds in the world.

Grytviken  In this abandoned whaling station, king penguins walk the streets and elephant seals lie around like they own the place  because they basically do. Here you might be able to see the South Georgia Museum as well as Shackletons grave.
Day 11: Southward bound
There may be sea ice on this route, and at the edge of the ice some south polar skuas and snow petrels could join the other seabirds trailing the vessel south.

Day 12: The scenic vistas of South Orkney
Depending on the conditions, you might visit Orcadas Base, an Argentine scientific station on Laurie Island in the South Orkney archipelago. The personnel here will happily show you their facility, where you can enjoy expansive views of the surrounding glaciers. If a visit isnt possible, you may instead land in Signy Islands Shingle Cove.
Day 13: Legendary Elephant Island
Youve now completed roughly the same route (albeit in the opposite direction) as Sir Ernest Shackleton did using only a small life boat, the James Caird, in spring of 1916. Watching Elephant Island materialize on the horizon after crossing all that water, its hard not to marvel at how he and his five-man crew accomplished that feat.

The purpose of Shackletons crossing was to rescue 22 shipwrecked members of his Imperial Trans-Antarctic Expedition, also known as the Endurance Expedition, who were stranded on Elephant Island. For four and a half months, Shackleton undertook this legendary rescue.

Conditions on Elephant Island are severe. The coastline is mostly made up of vertical rock and ice cliffs highly exposed to the elements. If possible you will take the Zodiacs to Point Wild, where the marooned members of Shackletons expedition miraculously managed to survive.
Day 14: Along the Antarctic Peninsula
If ice permits, you sail into the Antarctic Sound at the northwestern edge of the Weddell Sea. Here colossal tabular icebergs herald your arrival to the eastern edges of the Antarctic Peninsula. Brown Bluff is a potential location for a landing, where you may get the chance to set foot on the continent.
Day 15: Scenes of South Shetland
The volcanic islands of the South Shetlands are windswept and often cloaked in mist, but they do offer subtle pleasures: Theres a wide variety of flora (mosses, lichens, flowering grasses) and no small amount of fauna (gentoo penguins, chinstrap penguins, southern giant petrels).

In Deception Island, the ship plunges through Neptunes Bellows and into the flooded caldera. Here you find hot springs, an abandoned whaling station, and thousands of cape petrels  along with kelp gulls, brown and south polar skuas, and Antarctic terns. A good hike is a possibility in this fascinating and desolate volcanic landscape.
Day 16  20: Onward into Antarctica
Gray stone peaks sketched with snow, towers of broken blue-white ice, and unique polar wildlife below and above welcome you into the otherworldly expanse of Antarctica. You enter the area around Gerlache Strait, venturing into one of the most beautiful settings Antarctica has to offer.

Sites you may visit here include:

Neko Harbour  An epic landscape of mammoth glaciers and endless wind-carved snow, Neko Harbour offers opportunities for a Zodiac cruise and landing that afford the closest views of the surrounding alpine peaks.

Paradise Bay  You may be able to take a Zodiac cruise in these sprawling, ice-flecked waters, where theres a good chance youll encounter humpback and minke whales.

Pléneau & Petermann Islands  If the ice allows it, you could sail through the Lemaire Channel in search of Adélie penguins and blue-eyed shags. There is also a possibility youll encounter humpback and minke whales here, as well as leopard seals.

The aim is then to cut south, reaching Crystal Sound and the Antarctic Circle. You may make a landing at Detaille Island and visit an abandoned British research station, taking in the limitless landscape. Afterward you venture back into the area around Lemaire Channel and the Gerlache Strait.

As with all of our Antarctic trips, conditions on the Drake Passage determine the exact time of departure.
Day 21  22: Familiar seas, familiar friends
Your return voyage is far from lonely. While crossing the Drake, youre again greeted by the vast array of seabirds remembered from the passage south. But they seem a little more familiar to you now, and you to them.

Day 23: There and back again
Every adventure, no matter how grand, must eventually come to an end. Its now time to disembark in Ushuaia, but with memories that will accompany you wherever your next adventure lies.


Excluded from this voyage
-Any airfare, whether on scheduled or charter flights.
-Pre- and post- land arrangements.
-Passport and visa expenses.
-Government arrival and departure taxes.
-Meals ashore.
-Baggage, cancellation and personal insurance (which is mandatory).
-Excess baggage charges and all items of a personal nature such as laundry, bar, beverage charges and telecommunication charges.
-The customary gratuity at the end of the voyages for stewards and other service personnel aboard (guidelines will be provided). 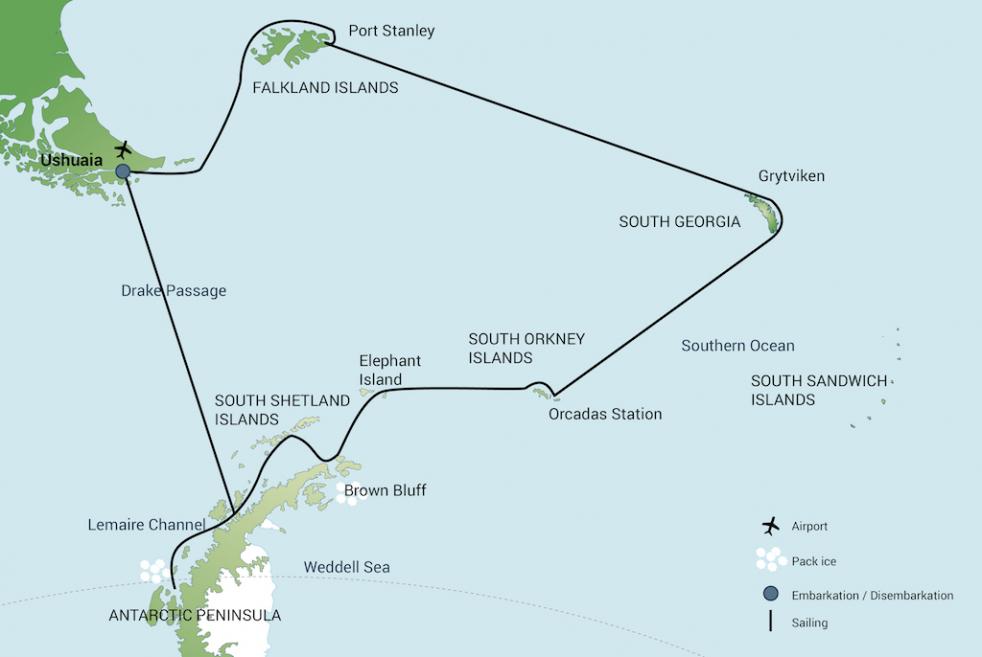 This cabin is suitable for families traveling with children, or passengers who do not require a twin or more luxurious cabin. 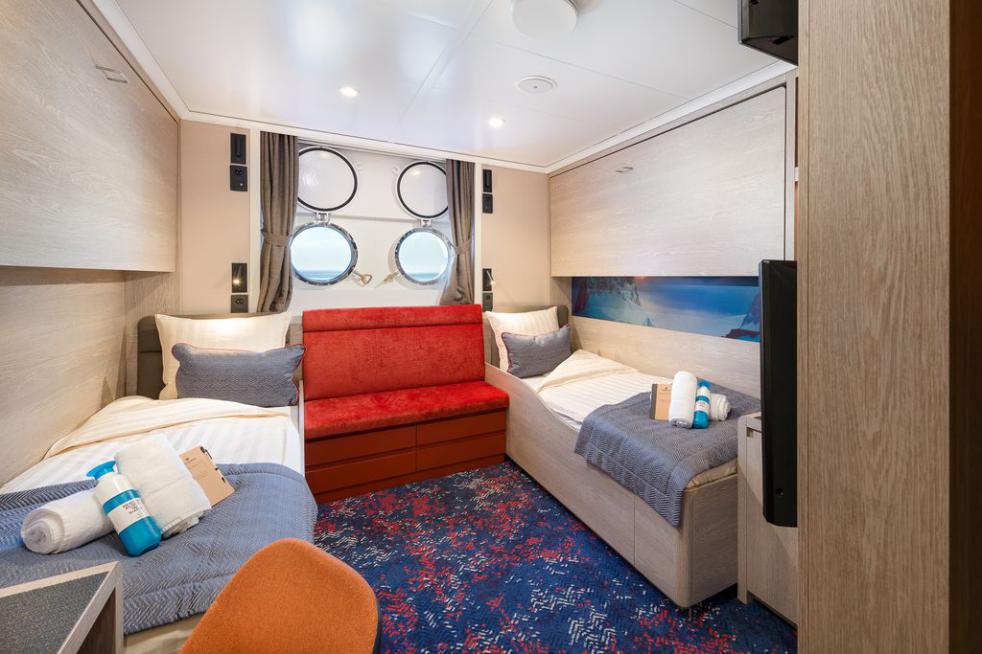 This cabin is suitable for families traveling with children, or passengers who do not require a twin or more luxurious cabin 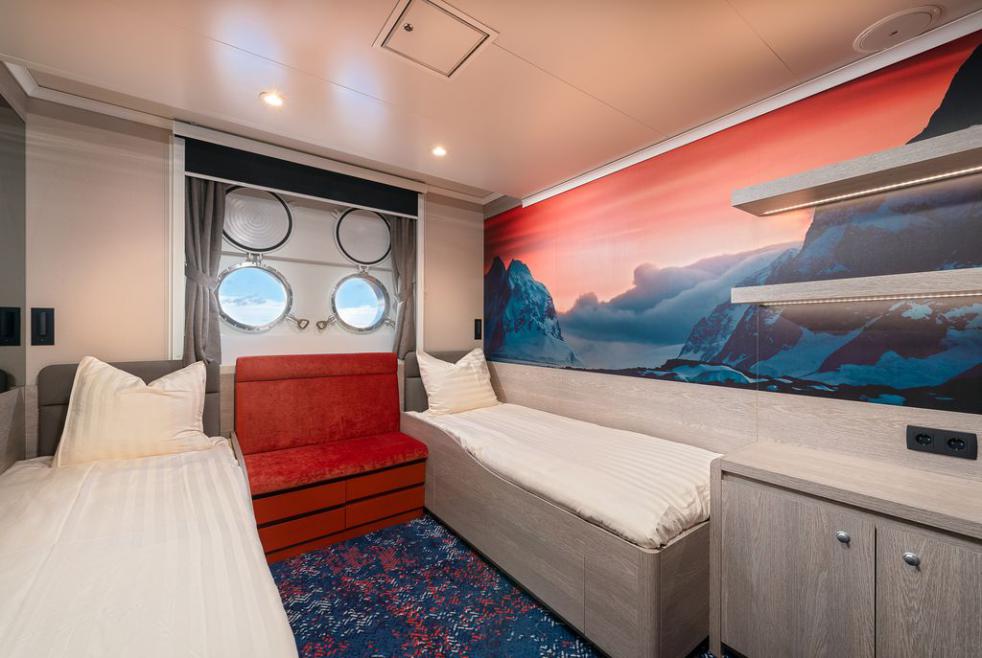 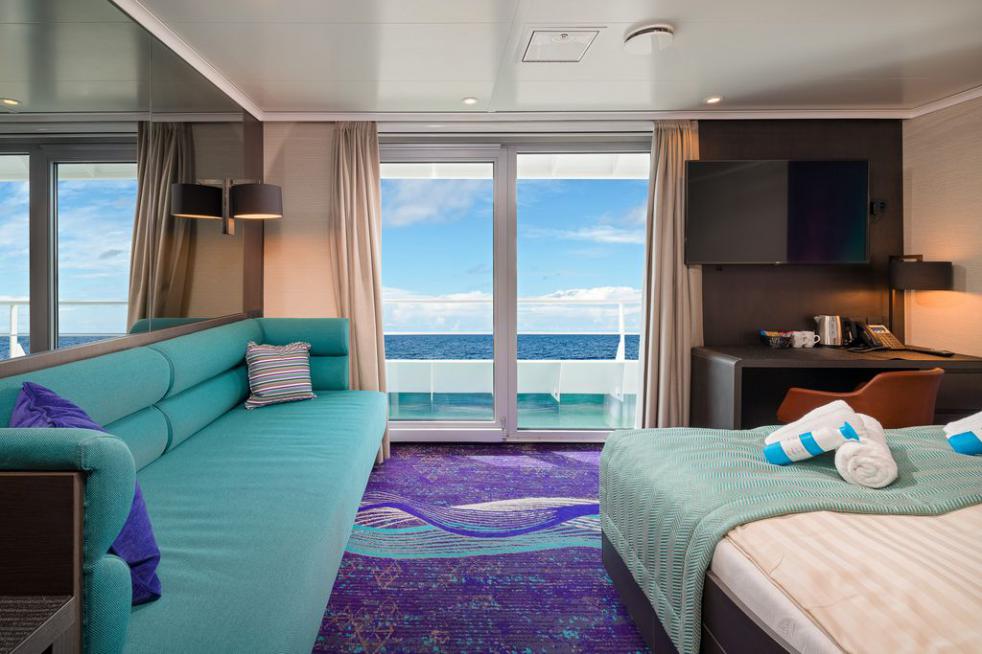 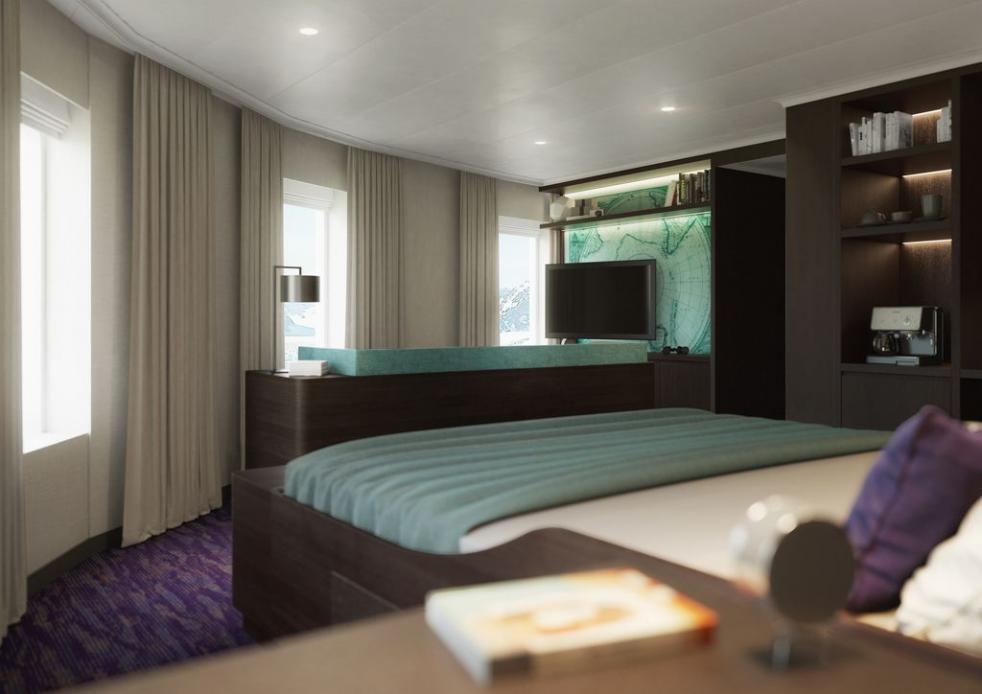