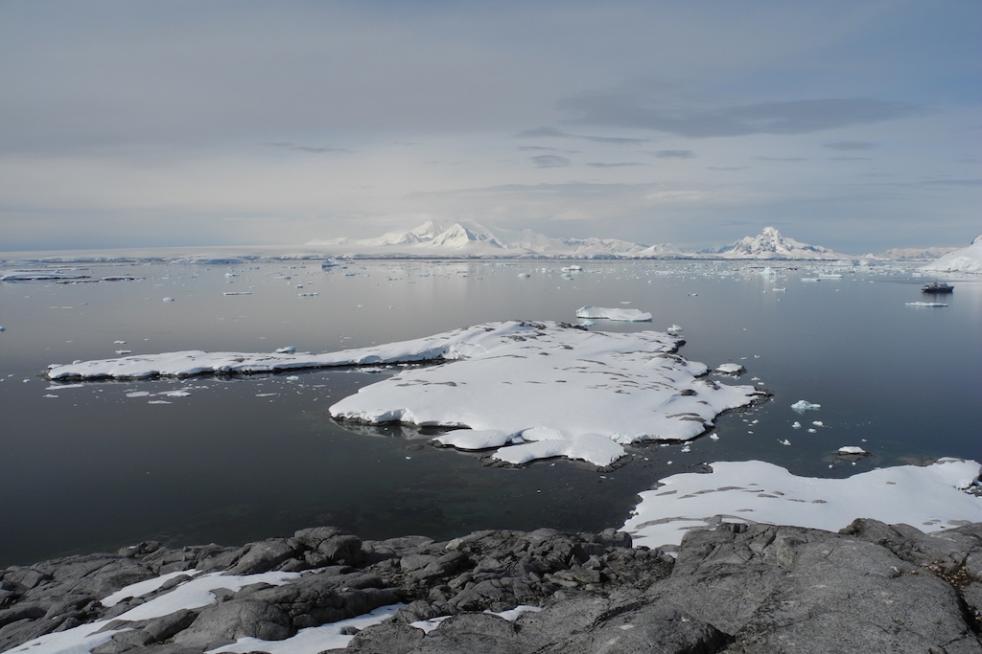 A voyage that goes further south where we intend to cross the antarctic Polar Circle. Furthermore, the end of the Antarctic season is a good time for whale watching.

Day 1: End of the world, start of a journey
Your voyage begins where the world drops off. Ushuaia, Argentina, reputed to be the southernmost city on the planet, is located on the far southern tip of South America. Starting in the afternoon, you embark from this small resort town on Tierra del Fuego, nicknamed The End of the World, and sail the mountain-fringed Beagle Channel for the remainder of the evening.
Day 2 - 3: Path of the polar explorers
Over the next two days on the Drake Passage, you enjoy some of the same experiences encountered by the great polar explorers who first charted these regions: cool salt breezes, rolling seas, maybe even a fin whale spouting up sea spray. After passing the Antarctic Convergence  Antarcticas natural boundary, formed when north-flowing cold waters collide with warmer sub-Antarctic seas  you are in the circum-Antarctic upwelling zone. Not only does the marine life change, the avian life changes too. Wandering albatrosses, grey-headed albatrosses, black-browed albatrosses, light-mantled sooty albatrosses, cape pigeons, southern fulmars, Wilsons storm petrels, blue petrels, and Antarctic petrels are a few of the birds you might see.
Day 4  5: Entering Antarctica
Gray stone peaks sketched with snow, towers of broken blue-white ice, and dramatically different wildlife below and above. You first pass the snow-capped Melchior Islands and Schollaert Channel, sailing between Brabant and Anvers Islands.

The intended route for you Antarctic adventure includes:

Cuverville Island  A small precipitous island nestled between the mountains of the Antarctic Peninsula and Rongé Island, Cuverville houses a large colony of gentoo penguins and breeding pairs of brown skuas.

Neko Harbour  An epic landscape of mammoth glaciers and endless wind-carved snow, Neko Harbour offers opportunities for a Zodiac cruise and landing that afford the closest views of the surrounding alpine peaks.

Paradise Bay  You could take a Zodiac cruise in these sprawling, ice-flecked waters before sailing to the Lemaire Channel.
Day 6  8: Through the Gullet
After a comfortable night of sailing, you wake among the many islands south of Lemaire Channel. You are now near the Antarctic Circle. At this point, a voyage through the aptly named Gullet  a narrow but picturesque channel between Adelaide Island and the Antarctic Continent  is possible if the ice isnt too thick. You can explore this area either from the prow of the ship or the edge of a Zodiac, getting the closest possible contact with the polar terrain as you venture southward.

Along the way, you may enjoy the following visits:

Pourquoi Pas Island  You might circumnavigate this island, named after the ship of the famous French explorer Jean-Baptiste Charcot. This location is known for its tight fjords and lofty, glacier-crowded mountains.

Horseshoe Island  This is the location of the former British Base Y, a remnant of the 1950s that is now unmanned though still equipped with almost all the technology it had while in service.

Stonington Island  Home to the former US East Base and British Base E, which was occupied until 1975, this island marks the southernmost landing site of the trip  68° south. If a landing here is possible, your road turns north again afterward, through the Gunnel Channel.

Hanusse Bay  Enjoy the scattered icebergs of this scenic bay, which offers a good chance of spotting whales.
Day 9  11: The whales of Crystal Sound
You are near the Antarctic Circle again, cutting north through the countless ice floes of Crystal Sound. Humpback whale sightings are likely, and your approach to the Fish Islands offers the possibility of a Zodiac cruise or even a landing. Whatever the case, the views beyond comparison in this area. There may also be more Adélie penguins congregating among the bergs nearby. Petermann & Pléneau Islands provide a great variety of birdlife, along with possibilities for Zodiac cruises among icebergs that are highly popular among leopard and crabeater seals. Minke whales, humpbacks, and gentoo penguins can also be found here.

Conditions on the Drake Passage determine the exact time of departure.
Day 12  13: Familiar seas, familiar friends
Your return voyage is far from lonely. While crossing the Drake, youre again greeted by the vast array of seabirds remembered from the passage south. But they seem a little more familiar to you now, and you to them.
Day 14: There and back again
Every adventure, no matter how grand, must eventually come to an end. Its now time to disembark in Ushuaia, but with memories that will accompany you wherever your next adventure lies.
Day 6  8: (Alternate program if the route to the south of Crystal Sound/Hanusse Bay is blocked by ice)
You may take a course around the western side of Adelaide Island to reach Marguerite Bay. Should ice conditions also not allow for this approach, you could continue the program by exploring the Antarctic Peninsula in and around the Penola and Gerlache Straits. 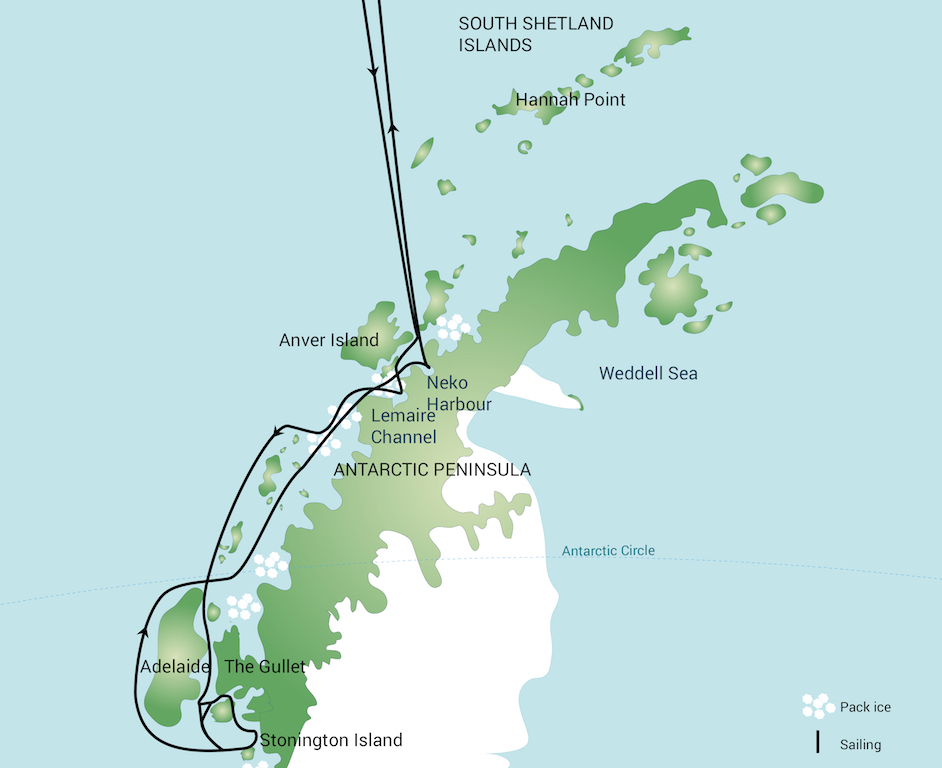 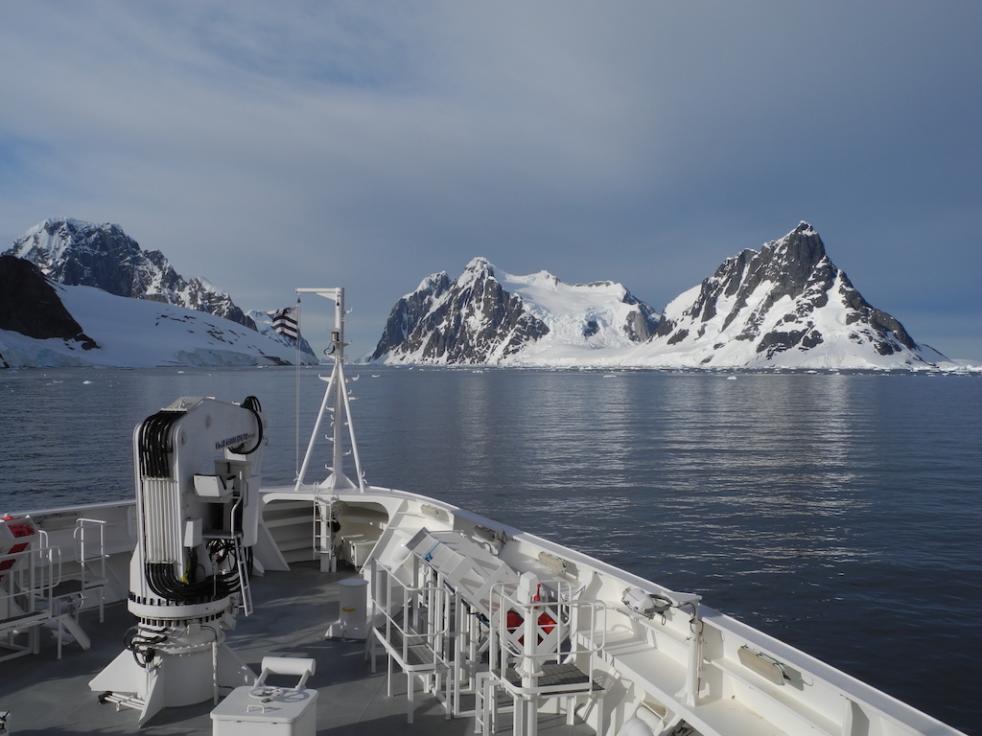 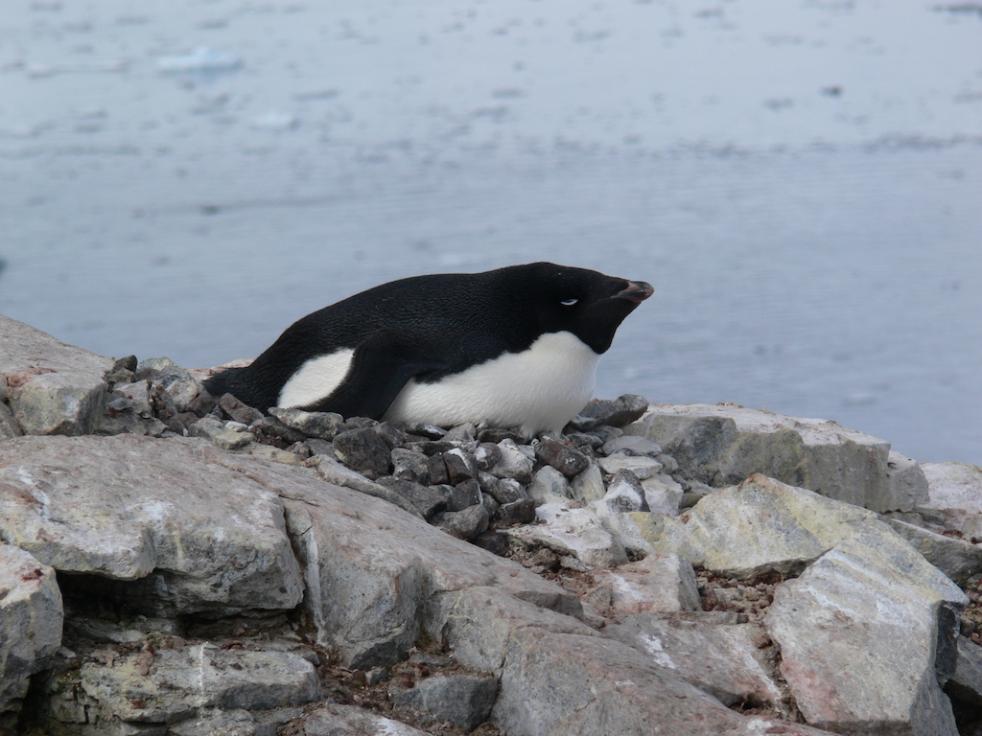 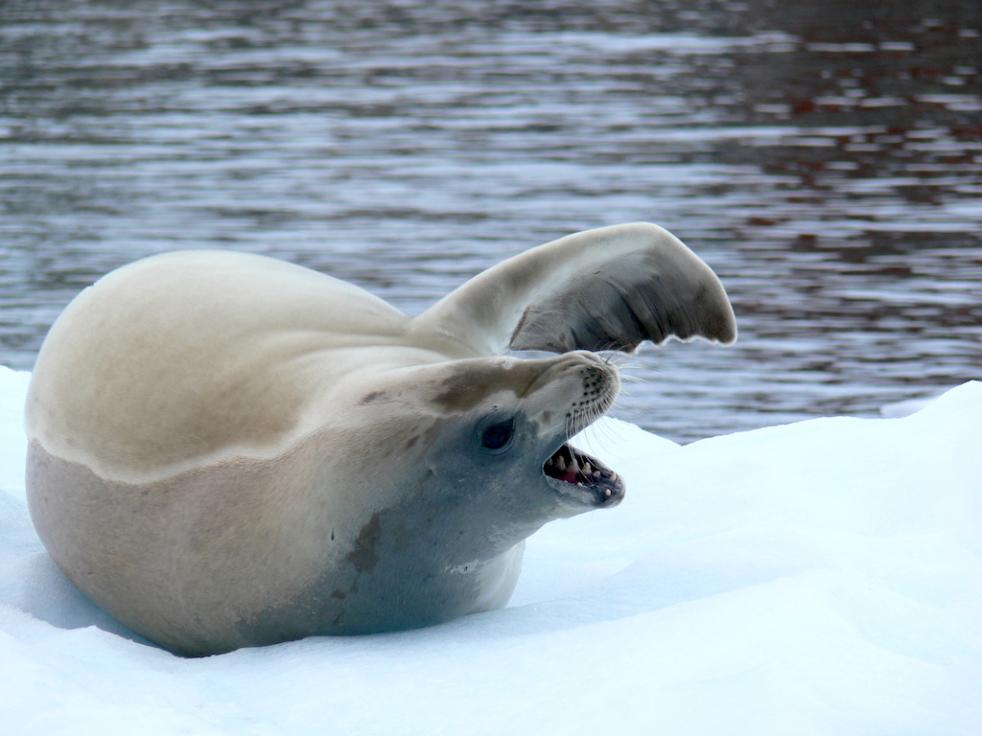